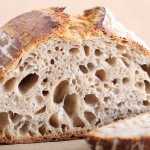 A recent clinical study looked at the benefits of using sourdough containing lactobacilli and fungal enzymes to hydrolyse (break down) the protein gluten, found in wheat flour products, into its component amino acids.  These baked goods were then able to be eaten by the patients who suffered with coeliac disease for the full 60 days without causing any toxicity or symptoms.

The participants in Italian study (journal of Clinical Gastroenterology and Hepatology), consumed 200g per day of flour based products, containing just 8 ppm residual gluten.   There was no increase in anti-tTG antibodies or change in the small intestinal mucosa for them, however many in the placebo group eating untreated products had to quickly drop out of the study due to the discomfort caused by the gluten.  Larger trials are now set to go ahead.  Dr Greco, the lead author of the study, referred to the technique as rediscovered and adapted biotechnology.

Bread has been prepared by man (with microorganisms) for tens of thousands of years.  It is one of the oldest prepared foods.  The process of leavening bread (lightening and softening of the finished product usually through carbon dioxide bubbles created by a biological or, more recently, chemical agent) can probably also be traced to prehistoric times.  Yeast spores occur everywhere, including the surface of cereal grains, so any dough left to rest will become naturally leavened.  Early bread was made with a lengthy exposure to air and mostly by using starter culture from a previous bread.  It was therefore fermented with yeasts and lactobacilli and would have a more sour flavour then bread today because of the lactic acid produced by the lactobacilli. 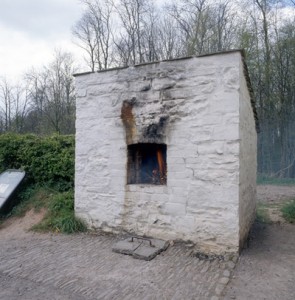 Historic community bread oven from the  National Museum Wales.  Women in the community would come together and bake, marking out the loaves they had prepared for their families.

At one time all breads were like today’s sourdough.  They made use of the microorganisms present on the flour and did not need any additional yeast.  Starters can be several generations old.  The leavening process was not understood until 19th Century when yeast was first identified and then soon afterwards the yeast Saccharomyces Cerevisiae was bred for its reliability and its speed of leavening.  It was sold as bakers yeast.  This almost completely replaced sourdough breads except for the artisan varieties. Are we now also looking at a health fuelled, beneficial bacteria revival of bread making?

According to Mark Sircus director of the IMVA “basic sourdough bread that had once been fermented for a healthy 8 hours or more is not to be found anywhere except in ones own kitchen today”.  He believes that only when wheat gluten is properly fermented is it healthy for human consumption. If not then he states it is “potentially one of the most highly allergenic foods we eat”.  It is similar to the controversy with soy which also can only be considered a health food if it is fermented for long enough.  Mark believes that the beneficial bacteria in sourdough help control candida albicans, whereas baker’s yeast is a pro-candida organism.

Discusssing the benefits in more depth here he states that enzymes develop during the lengthy proofing which are then not lost in baking since the center of the loaf remains at a lower temperature than the crust. In fact the fermentation, partly from the lactobacilli, makes eating good quality bread an aid to digestion of all complex carbohydrate foods including other grains, beans, and vegetables. 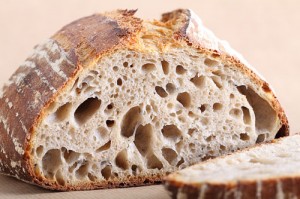 Sourdough breads available commercially have also been researched for their benefits over other breads in terms of their effects on blood sugar levels.  The lactic acid made by the bacteria as well as acids produced by the yeast during the fermentation process cause a decrease in the amount of glucose that is absorbed by the blood, effectively lowering the glycemic index.  A 2009 study in the British Journal of Nutrition found that sourdough bread produced an even lower glucose response than whole wheat bread.  Rye sourdough bread can have a GI as low as 48 (GL of 6) whereas a wholemeal bread may have a GI of 59 (GL of 7) and white bread ranges from 71 to about 89 (Gl of 9 to 18).

Shine like a star!
View all posts by Katie Clare →
This entry was posted in Front Page, Uncategorized and tagged Beneficial bacteria, Fermentation, Sourdough. Bookmark the permalink.